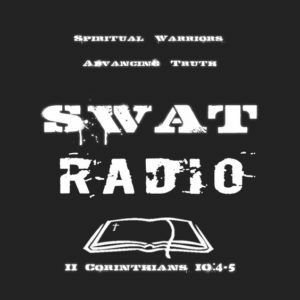 SWAT Radio™, a ministry of His Light International Ministries, is a Christian talk show that communicates practical and relevant truth to men gathered around God’s Word as Battle Buddies!  As a former Marine and FBI agent, Doug knows the value of having “battle buddies” around you that can help you see and defend your blind spots and help you when the battle gets rough.  So many men struggle to be the spiritual leaders and warriors that God has called us to be.  Either they have forgotten that we are in a war and have been sidetracked by the enemy, or they have been wounded and try to fight their battles alone.  No matter the reason for being out of the battle, our desire is to encourage men to join us and become a warrior for TRUTH!  God’s Word says, “For the weapons of our warfare are not of the flesh but have Divine power to destroy strongholds.  We destroy arguments and every lofty opinion raised against the knowledge of God, and take every thought captive to obey Christ.” (2 Corinthians 10:4-5)